This ride covered the area of town between Federal Street and Chapman Street, from Main Street up to Silver Street, and was brought to you by the new albums from Hinds and from Mt. Joy, both of which I recommend.

This was my route: 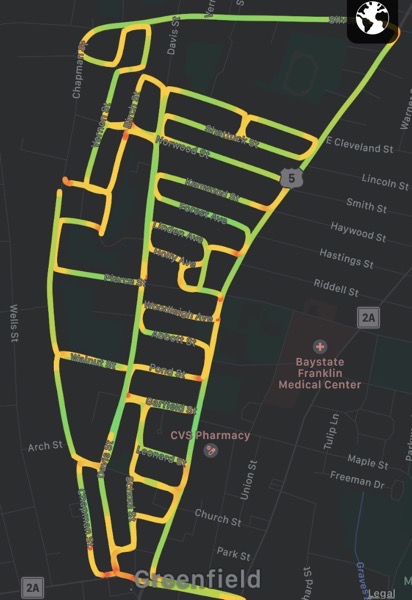 The main thing I learned on this ride is that there are a lot of streets between Federal and Chapman.

I hate to keep beating a dead horse, but let’s talk about Federal Street. Here is the approach to the intersection at Beacon Street (apologies for the inadvertant Dutch angle): 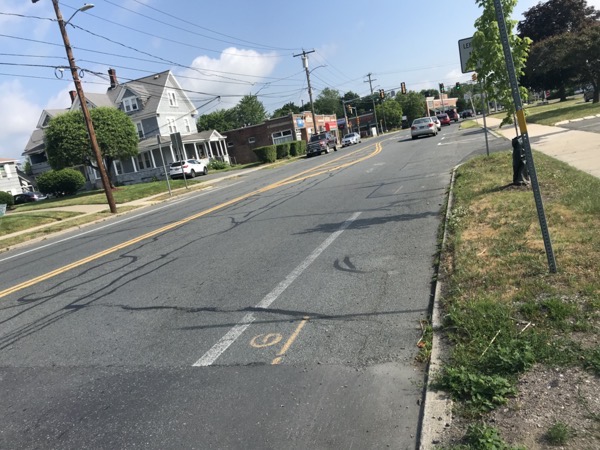 At the bottom of the frame is the end of the bike lane. Then there is the entrance to a church parking lot, two random parking spots (!?), and then the intersection. What are bikes supposed to do here? In the center of the photo is a very faded marking indicating bikes should join the main traffic lane, but if you missed that, you’re not the only one.

I kept going north on Federal Street until I got to Silver Street. Like the Beacon intersection, this intersection is difficult for bikes for all the same reasons, especially if you’re turning left (as I was in this case) and have to get from the bike line on the right side of the street across the lane of cars and into the left-turn lane.

Additionally, while there are some small and faded markings on the pavement indicating that bikes should occupy the center of the lane at the signal, this is one of the many intersections in town where you will never get a left-turn arrow if you are on a bike in the turn lane. I pulled way out into the middle of the intersection, waited for a break in the oncoming traffic, and then turned onto Silver Street. 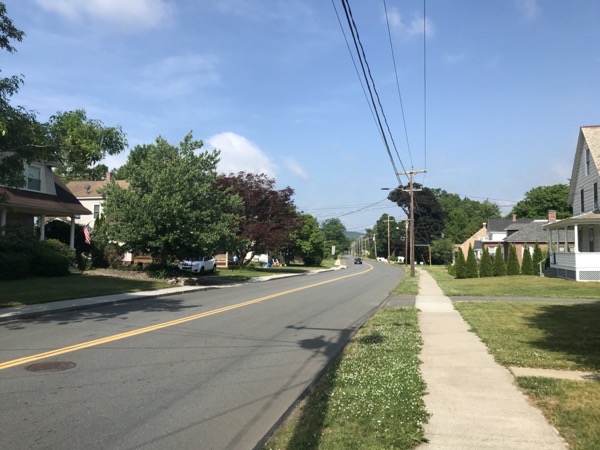 Although this street was completely repaved and got new curbs and sidewalks just a few years ago, note that there are, as usual, no edge lines and no accommodation whatsoever for bikes. Silver Street is one of only two streets in Greenfield that goes east/west across town, and while it may not look busy in that photo, a car passed me approximately every ten seconds. The street is also quite narrow for bikes, especially if you’re pulling a trailer of any kind.

From Silver Street, I headed south on Chapman and then wound my way through most of the small side streets between Chapman and Davis Streets. These are quiet little neighborhoods with lot short streets that only run for a block or two. I’ll admit that I lost track and missed the west end of Norwood Street and the south end of Vernon.

Chapman is a nice street to ride a bike on, at least once it widens out a few blocks north of Main Street. In this picture, I am standing at the corner of Chapman and (I think) Charles Street, looking north: 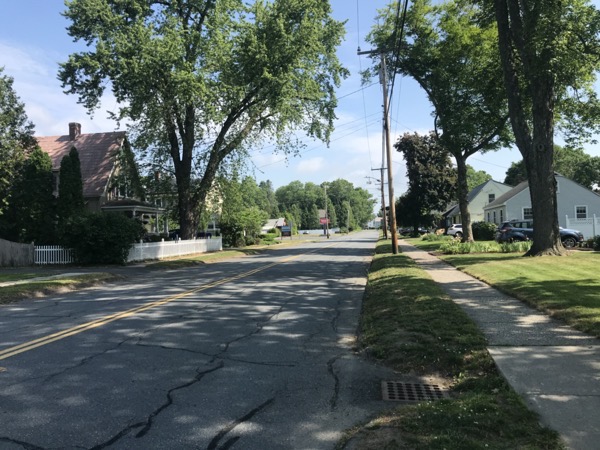 And here is the view south from the same spot: 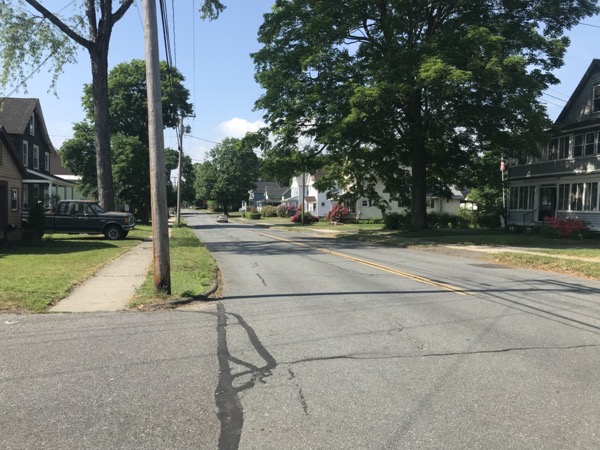 What is nice about this stretch of street is that it is wide enough to accommodate bikes and cars (although, as usual, bike lane markings would be nice), it is not terribly busy, and there are very few cars parallel-parked on the street. Chapman Street also runs straight for long stretches, so there are few places where visibility is a problem.

Eventually, I made my way back down to Main Street. It is worth stopping here to note the situation that bikes face on Main Street: 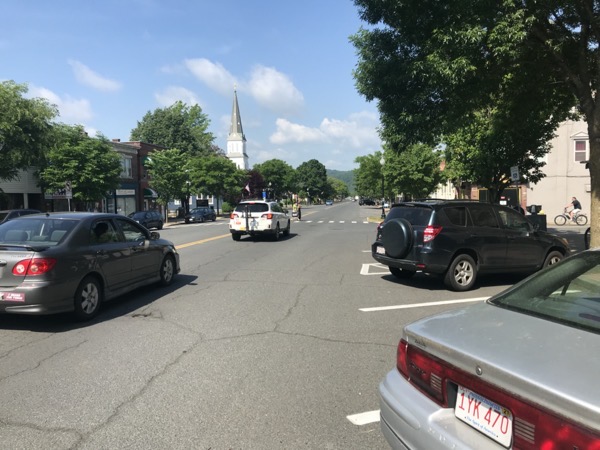 At this point, I have lost count of the number of times I have nearly been hit by a car backing out of one of these parking spots, by a car zipping out into traffic from one of the adjoining streets, or by someone swerving out to pass a turning car on the right. If you are on a bike on Main Street in this town, travel at your own risk.

Heading back north, I began zig-zagging back and forth on the side streets between Davis and Federal. As I mentioned at the top of the post, there are a lot of these side streets, and on nearly every one, I was reminded of the elevation change as one heads from west to east across town.

I was also reminded here of the challenge of crossing or turning out onto Federal Street from any of the side streets approaching from the west. Unless you are at either the Pierce/Beacon or the Silver Street intersection—neither of which seem to have signals that recognize bikes, by the way—there are no stops for traffic on Federal Street. Turning left from any of the eastbound side streets means waiting a while for any break in the oncoming cars from both directions and then taking your chances.

From there, I covered the entirety of Davis Street.

Like Chapman Street, Davis is much narrower just north of Main Street, and suffers from a problem that plagues many of the streets in and around the downtown area: 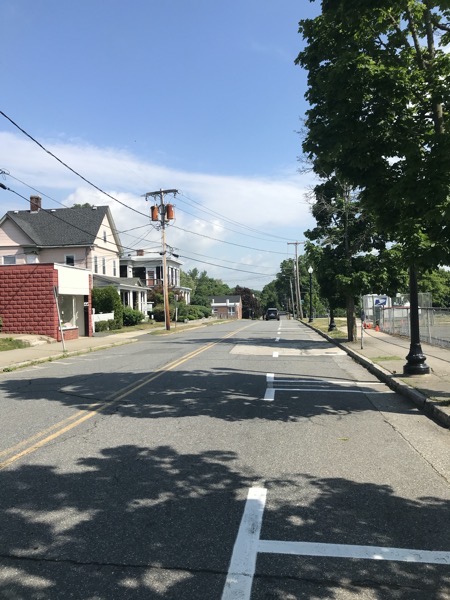 Look at that on-street parking, and look at how little space it leaves for the actual street. It was a Saturday morning when I took that picture, so maybe those spots are all filled on a weekday. Considering that right next to them is the single largest municipal parking lot in town, though, I doubt it. I think a lot of this sort of ridiculous on-street parking is a leftover from when the downtown parking garage was being built—people were panicking about not having enough parking, and there was a flurry of line-painting and temporary signage all over town.

I also learned on this stretch of my ride that Davis Street is apparently a bike route: 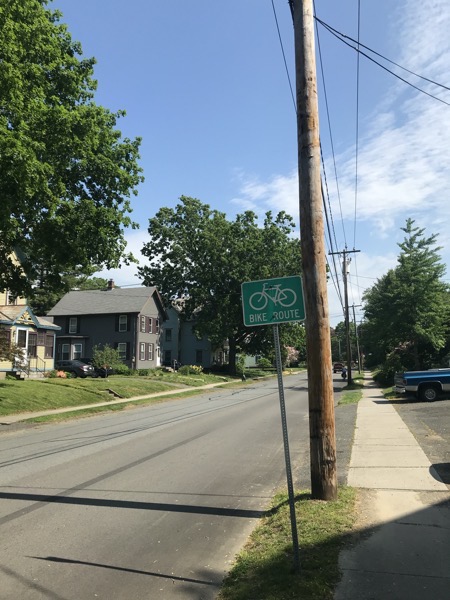 These signs are dotted up and down both sides of Davis. Many lean slightly askew and I have lived in Greenfield for twelve years and only just noticed them, but at least they are there, I guess.

Overall, I came away from this ride thinking that Davis and Chapman Streets would make pretty good north/south routes through town for biking. The problem is that a lot of cars looking to avoid Federal Street also use these streets. I think the city would do well to look at ways of limiting through traffic on at least one of them and doing a bit of work on signage and markings to encourage bike traffic.

One Reply to “Biking in Greenfield: Day 3”