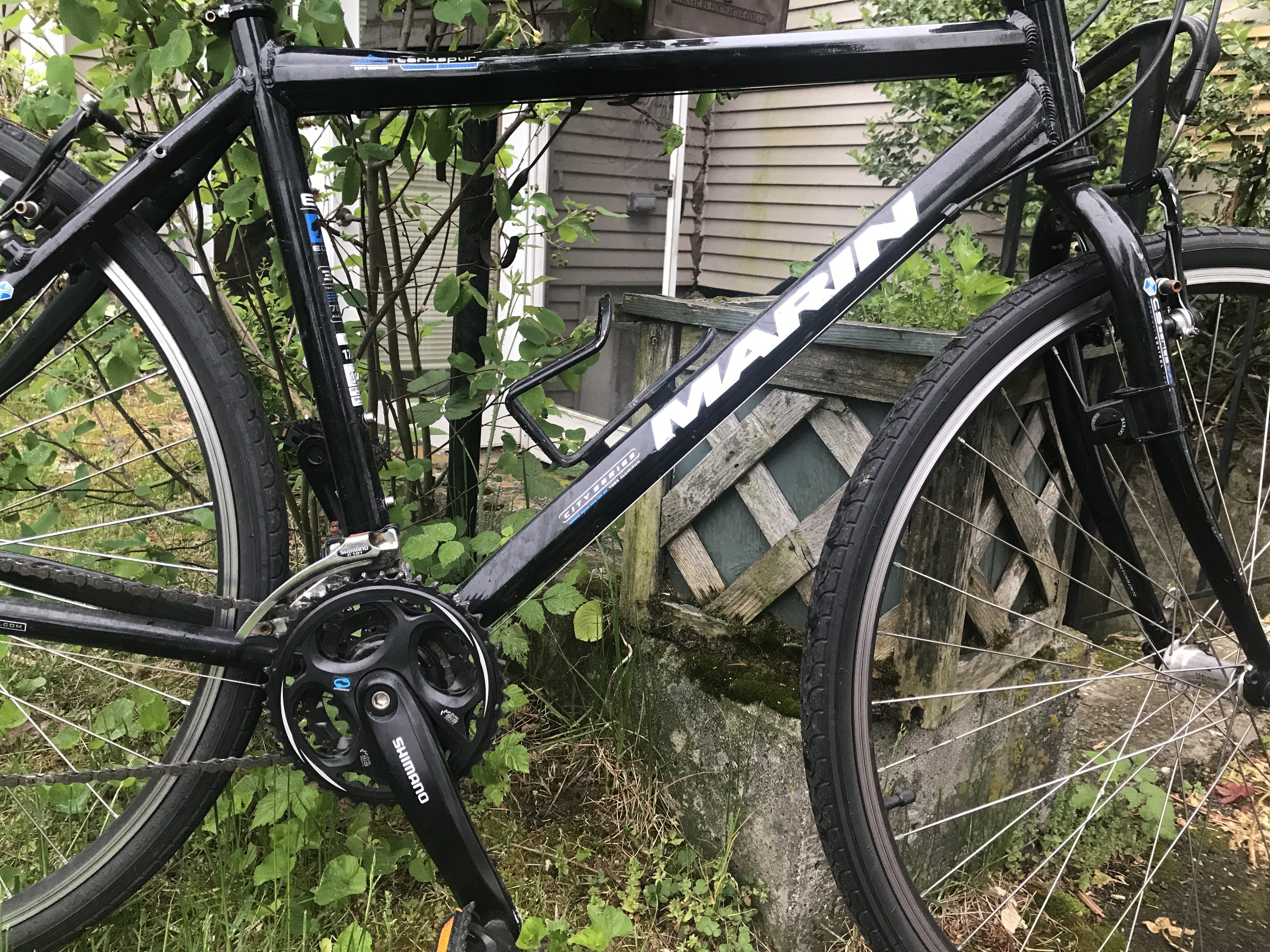 I headed out for round 2 this past weekend. I covered the area from Crescent Street at the bottom southeast corner up to (roughly) the corner of Silver and Federal at the upper northwest corner, including all the side streets around Beacon Field and the side streets between High and Federal:

This ride was brought to you by Straitjacket Fits’ album Hail and Goat by The Jesus Lizard.

At the very start of my ride, I encountered what I find to be one of the more harrowing stretches of road in town, where Crescent Street winds around down toward the north entrance gate to Highland Park. Here is the view looking up Crescent, heading toward the center of town:

And here is the view the opposite direction, toward the Highland Park gate and Mountain Road:

With the trees and the hill, this is an S-curve that is blind on both ends. I have walked, run, and biked this stretch of street, and it is terrifying every single time. Cars tend to zoom around the lower curve (especially if they have just come down Mountain Road from Poet’s Seat), and there is no sidewalk on either side of the street.

Around the curve, we have the start of Mountain Road:

Again, no sidewalks or edge markings of any kind here, and with the curve and trees/underbrush at the top, the farther you get up the hill, the harder it gets to see any cars coming down the hill toward you.

From the bottom of Mountain Road, I headed west, hitting High Street at the corner of George Street:

This stretch of High Street is not terrible to ride on, but it’s not great, either. It is close enough to the center of town that most passing cars are going relatively slow. However, there are no edge lines, and you have to be pretty comfortable with cars passing pretty closely. Going south (on the other side of the street) is more of a challenge, as there tend to be cars parked along the curb or half up on the grass and the street gets more narrow as you approach the intersection with Main Street.

I looped through the Madison Circle neighborhood south of Beacon Field, and then took Maple Street all the way across to Federal. Here I encountered a portion of the sole marked bike lane in Greenfield:

I suppose I should not complain too much, but in some ways, this bike lane seems worse than having nothing at all. It is sporadically marked, and there is no painted or signed indication of what bikes should do at the multiple signaled intersections on Federal Street.

From there, I went down to Sanderson and then made my way back north, riding and back and forth across the side streets between High and Federal. Not a lot to report here—residential streets with the occasional car parked along the curb in front of a house. There is some amount of cutting through that happens, though, and I could imagine how making most of these streets local traffic only (with the exception of Sanderson and Beacon) would be an improvement.

Lincoln Street brought me back to High Street by the Farmers Exchange, where I headed north toward Silver Street:

This stretch of High Street is where things gets dicey. The street is slightly wider here than it is closer to the center of town, but cars go a lot faster. There are still no edge lines, and the rightward curve of the street as you approach Silver Street means that cars heading north have a hard time seeing bikes going the same direction.

The intersection at Silver Street is also tricky for bikes, but more on that in a future ride and post. Generally, given that High Street is the main route to Stop and Shop, the absence of any accommodation for bike traffic on this route seems particularly egregious.

Silver Street itself is also problematic for bikes—busy with cars, rather narrow, and no edge lines. It is worse west of Federal Street, but again, more on that in a future post.

From Silver Street, I headed down Washburn Avenue and its various spurs, back over to Federal via E. Cleveland Street, and then back around to the side streets north of Beacon Field. These are all generally quiet streets for kids to ride around on, but even these get the occasional car zooming through.

And that is a good microcosm of the larger problem with biking in Greenfield. Bikes on the streets are an afterthought. As with most American cities and towns, the primary concerns of the people designing the streets, the paint markings, the signage, and the intersection signaling, are traffic flow and parking. The major streets are a travel-at-your-own risk affair for bicycles, and side streets that should be safe and quiet have cars speeding through, driven by people who are not habituated to thinking about sharing the road.

The end of my ride brought me up Maple Street to the intersection with Mountain Road by the Poet’s Seat parking lot:

I am astounded at how poorly managed this intersection is.

Poet’s Seat (along with the adjoining trails in Rocky Mountain Park and Highland Park) is one of the major outdoor recreation areas in town. Multiple hiking trails—all of them heavily used on a daily basis—come out at the top of Mountain Road, cars are constantly coming and going from the Poet’s Seat parking lot, people are crossing the road(s) on foot, and yet there is no cross-walk, no markings of any kind, and the stop sign where Mountain Road comes up from Crescent Street gets hit by a car at least two or three times every year. Currently, there is a temporary stop sign mounted on a construction barricade in the underbrush on the side of the road. Having trouble spotting it in the picture? Yeah—me too.

This entire intersection is incredibly dangerous, and I amazed no one has been killed yet trying to navigate it.

One final note… here is what the surface of the road looks like coming up the hill on Maple Street:

I stopped to take this picture because I was losing traction on my rear wheel trying to get up the hill, but this sort of debris is by no means unique to this stretch of street. All around town, the side of the road is littered with all kinds of junk—sand and gravel, loose chunks of pavement, discarded nips, broken glass, and various fast-food litter. Greenfield is a small, cash-strapped city; we struggle to fund our schools and our health and building inspection departments, so I get why street-sweeping is, at best, a once-a-year affair.

That said, perhaps if we had more thoughtfully designed and laid-out biking routes on our streets, we could do a better job of prioritizing routine maintenance to keep them clean and safe.