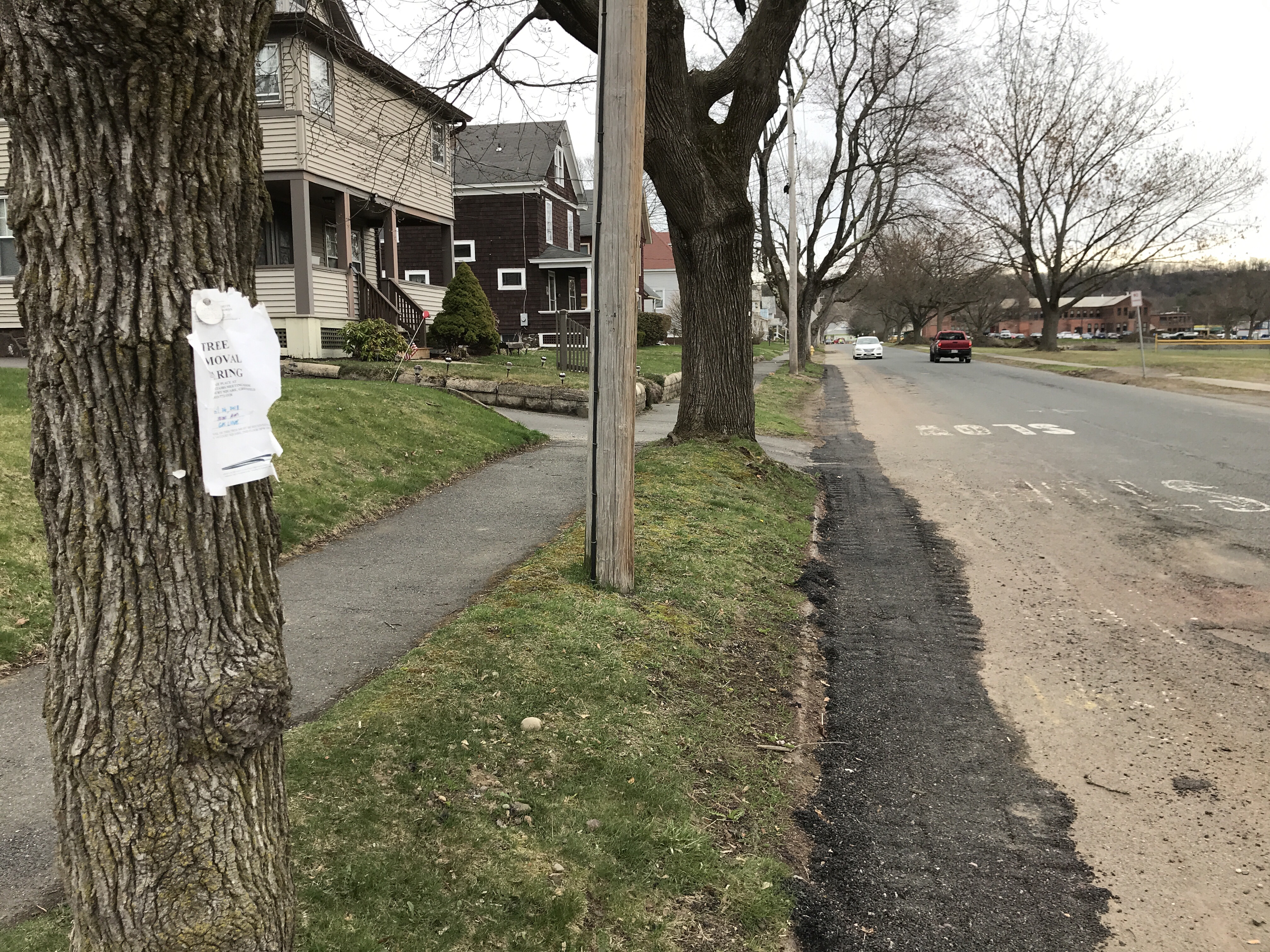 I was not able to make it to last night’s tree hearing at Town Hall, but the Recorder has a reasonably good summary of the proceedings:

Seven trees on Norwood Street once slated for removal are now safe, and gas line installation in tree belts will be on hold until at least Monday, according to Director of Public Works Donald Ouellette.

Ouellette said the work will be on pause until a preliminary injunction hearing in Franklin County Superior Court Monday. That hearing was scheduled after concerned residents objected to the removal of seven trees on Norwood Street. The trees were to be removed to allow Berkshire Gas to easily install gas lines.

Ouellette’s announcements came during a public tree hearing Thursday, when the city discussed the potential removal of 19 trees along various streets, including the seven trees on Norwood Street.

Ouellette said gas lines were already replaced on Norwood Street, and that the seven trees posted for potential removal are not going to face the ax after all.

The removal of the trees came under scrutiny when one resident, Glen Ayers of 254 Davis St., filed a complaint along with 21 other residents, including his partner Mary Chicoine.

More than 30 residents showed up to Thursday’s hearing, with several objecting to the removal of trees unless replacement trees are planted.

“Trees are living entities,” Sandra Boston of Abbott Street said after the meeting. “I want trees treated like entities of our community.”

After several objections to trees being cut down, Ouellette said he would ask Berkshire Gas to stop going through tree belts to replace gas lines today.

I’m glad to hear that this current piece of work is on hold (at least for now), but there remains the larger open question of what Greenfield’s overall strategy regarding its tree canopy actually is.

Greenfield has a tree ordinance, and it has a Tree Warden. However, the focus of the tree ordinance is the handling of individual trees—what to do if a particular tree needs to come down or if a resident requests the planting of a tree. Nowhere in the ordinance is there any notion of what we as a town want in terms of tree cover or how we want to manage the town’s trees on an ongoing, strategic basis.

As for the Tree Warden, it is an appointed position in Greenfield, as opposed to an elected position as is more standard in other Massachusetts cities. Furthermore, the person currently in that role is a DPW employee, and as such, has little latitude for independence from the DPW and its Director.

Absent a strategic plan or vision for Greenfield’s trees and an empowered, fully independent advocate for that plan, we will always be left with conflicts like the one currently going on around Norwood Street. It is great that a bunch of folks turned out last night and spoke up, but that is not a sustainable model for preserving our existing stock of trees, much less replenishing or expanding it.