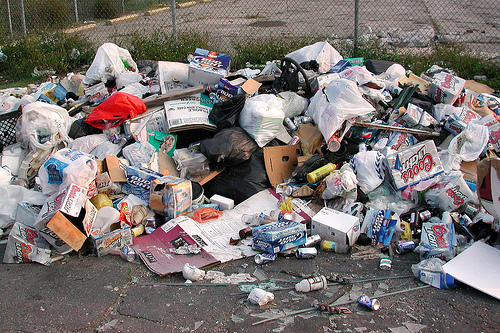 There were probably 30-40 people in attendance, including Mayor Martin, Town Council Members Sund, Dolan, Gilmour, Mayo, and Wheeler, as well as a number of DPW employees.

The cost of disposing of wastewater sludge (what is left over after water goes through the sewage treatment plant) in Greenfield has been steadily increasing—up from around $180,000 four years ago to over $400,000 by the end of 2018. The increases are due to the shrinking number of disposal facilities, and this trend shows no sign of stopping. Greenfield currently ships is wastewater sludge via truck to three fairly distant facilities, one of which is in Cranston, RI.

To address the issue, the DPW is proposing the construction of an anaerobic digest (essentially a large septic tank) here in Greenfield. Building the facility would cost approximately $280,000 per year, and Dir. Ouellette estimates it would require the addition of one staff member to the DPW payroll. The digester would reduce the volume of solids by 80-85% with little to no emissions, with the remaining digestate then being sent to Montague’s compost facility.

The town is currently working with Montague, Hadley, Sunderland, and Deerfield (with potential but less formal interest from Northfield, Shelburn, and Erving) to share the usage and cost of the facility. However, Ouellette stressed several times that they are not looking to go any farther afield than that.

While he admitted his schedule is aggressive, Ouellete is looking for design work to start this fall (assuming Greenfield receives the grant money it is looking for to help with the costs). On this timeline, construction would start in the spring of 2019 and take about six months.

In terms of solid waste (i.e., pickup of residential trash and recycling), Greenfield is one of about twenty municipalities in Massachusetts that still provides curbside pickup services. Trash and recycling collected at the transfer station is currently trucked to Holyoke, and then put on trains to be shipped to Ohio.

The recycling rate in town right now is around 40% (which is below average). It peaked at around 55% when the town introduced pay-as-you-throw garbage stickers and has declined steadily since then.

The town’s total annual budget for solid waste removal currently sits at about $612,000, while revenue (including the sale of garbage stickers) is running at $734,000. It is worth noting, however, that the money from the garbage stickers does not go directly to the DPW, but rather into general town funds. As with wastewater sludge, the options for final disposal destinations are shrinking, and both Ouellette and Mayor Martin stated that the days of recycling as a major revenue generator are over given the changes in global demand (mostly China).

With approximately 4000 customers (including 400-480 people per week coming to the transfer station), Ouellette estimates that the cost of solid waste removal in Greenfield is around $223 per customer per year. That is quite low, but seems to have been kept artificially low by the lack of investment in the town’s infrastructure.

First, the transfer station is old, out of date, and in poor condition. The facility will be subject to OSHA inspection beginning this September and Ouellette said there is no way it will pass, repairs and upgrades having been put off for years. Additionally, it is a highly energy inefficient building, with excessive costs for heating and cooling. Ouellette guessed the cost of necessary upgrades to the transfer station would be around $1.5 million, but admitted that the actual number could be lower or much higher than that.

The second challenge is the DPW’s fleet of vehicles. As with the transfer station, replacements and upgrades have been put off for a number of years, leaving the town with an aging and unreliable fleet. Ouellette is planning to reduce the current 5-day schedule for residential pickup to four days per week in response to two of their eight trucks no longer being usable.

In terms of other options, there was talk of raising the price of garbage stickers, which has happened only once (in 2007) since they were introduced. Such a move would go a long way toward potentially covering the costs of fleet maintenance and upgrades. Ouellette stressed that they would need to be careful with how big such an increase would be lest they begin incentivizing illegal dumping.

Another option to consider (and one which has caused much controversy over the last month) is outsourcing of waste removal and management of the transfer station to a third party. There was an extended discussion in the room of the benefits and drawbacks of such a proposal. With a larger and more efficient fleet of trucks, a private company could remove more trash and recycling more quickly and could allocate trucks from elsewhere to provide redundancy. Such a company might also have access to disposal destinations that are currently unavailable to the town.

However, as a number of attendees pointed out, going to a third-party provider for these services would mean giving up local control and leave Greenfield dependent on the provider. There was also discussion of Greenfield’s moral obligation as a town to be responsible for the waste it generators and where that waste ends up.

Last night’s public forum was a fairly positive and constructive affair. While there were obviously some strong feelings in the room regarding the idea of outsourcing waste removal, the political debate was largely set aside and the focus was on practical considerations.

More interesting (and encouraging) was the broader discussion of the need for Greenfield to think strategically about its investments in municipal infrastructure. A number of commenters—including town employees and member of the Town Council—made the point that there has been too much focus on cost-avoidance and that a policy of “We don’t replace anything until it’s broken” is not a sustainable solution.

In general, the forum attendees seemed to be supportive of the anaerobic digester, and interested in hearing more specifics (financial, practical, and strategic) regarding Greenfield’s options for the future of solid waste removal.